During the early years of the gold rush, some Aboriginal men played a crucial role as Native Police.

The Native Police were the first police officers (troopers) to arrive on the Ballarat goldfields. These were not local Wadawurrung men but Aboriginal men from other parts of Victoria, mainly around Melbourne. The first group under the command of Captain Dana, arrived here on 20th September, 1851, shortly after gold was discovered.

The following day, Gold Commissioner F. C. Doveton announced that the government was introducing Gold Licenses. From that moment on the Native Police had a challenging time maintaining law and order on the Ballarat goldfields. By May 1852 Captain Dana was having trouble keeping the Aboriginal troopers from deserting. Some left to return to their families, but the majority left the force to search for gold.

Aboriginal policemen have played a significant role in Australia’s history, but their contribution across different states and time periods have varied.

“… the useful black troopers were for a time used to escort prisoners to town; these fine fellows were at first the only mounted police; and indeed performed all the police duty at the Ballarat diggings.” This would have been a confronting sight for many Europeans on the goldfields; Aboriginal men - “savages” in the eyes of many at the time - with government-authorized power over the miners. The following description from the Illustrated Australian Magazine appears to match this image.
T. Ham, Native Police Encampment Ballarat 1853. Original sketch by W. Strutt. Reproduced with permission of the Gold Museum, Ballarat.

Many miners noted the presence of the Native Police Corps. on the goldfields as conspicuous and adding a touch of exotica to the Ballarat scene such as the following extract from the Illustrated Australian Magazine of 1852. “His [The Commissioner’s] tent has the mounted police on one side, and the Native Police, in an extensive mia mia, on the other. The blackfellows are busy tailoring, and here is one on the broad of his back in the sun feigning sleep; and incessantly chattering some monotonous chant … Close by the Commissioner’s tent you observe the encampment of the native police. They too are enjoying all the exhilaration of the moment. How graceful are their agile movements. Yonder black fellow is making a feigned attack on his brother with a frying pan; his brother is about to shoot him with his knife. What admirable attributes in both! What dexterous dodging! Frolic is universal among them.”

“Met on our way [to Ballarat] a prisoner and a villainous squint-eyed scoundrel he looked, handcuffed and escorted by two well mounted and smart looking black troopers (of whom I have made a drawing), on the road to Melbourne… the useful black troopers were for a time used to escort prisoners to town; these fine fellows were at first the only mounted police; and indeed performed all the police duty at the Ballarat diggings.” Miner and artist William Strutt, 1851.

William Brownbill, who found gold at Brown Hill (now a suburb in eastern Ballarat) in 1851, told of how he was caught without a license, taken to the commissioner’s camp, and “guarded by eight or nine black troopers, who in their uniform and polished boots, looked as proud as possible.”

A letter to The Argus editor on 26th November 1851 from ‘Bucknalook’ defended the Native Police’s efficiency and deplored the crass miserliness of the colonial government towards them: “A great deal has been said about Christianity and civilizing, this is all talk, talk! Talk of equality of rights! … The ambiguous captain [Captain Dana] of this very warlike regiment, it will be seen, figures with 300 pounds [per year] attached to his name … whilst the efficient part of the company, namely the natives themselves have (Oh! Whisper it not in the same breath with the word justice, mercy, Christianity or equality or rights!) THREE PENCE PER DAY!! Many of these blacks have as correct an idea of the component parts of a shilling, that it is composed of 12 pence as their redoubtable captain, and what must their impression be of this gross act of injustice.”

An incident on the Ballarat goldfields on 21st September 1851 illustrates both the success of the Native Police in being prepared to intervene in cases of disorder, and their growing unpopularity in the eyes of miners. Commissioner Doveton and his assistant David Armstrong explained to the diggers the government’s decision to introduce licensing fees, which attracted an angry response from the crowd. A public meeting was convened on the spot. The first miners who applied to pay the fee were struck and pelted by “the mob”, as Dana referred to them. Had it not been for the presence of the Native Police, Dana reported, “those diggers would have been seriously injured.”

George Sutherland, a miner at the new goldfield of Ballarat considered the Native Police a potent force: “The Commissioners, Armstrong and Doveton, arrived, and built a small hut on the top of the hill opposite Golden Point. There was also a police officer, named Captain Dana, accompanied by a number of black troopers, ready to support the authority of the commissioners. Going around the ground, they inquisitively looked into each of the claims which were being worked by the industrious diggers.”

The presence of Aboriginal policemen was condemned by some miners who were already angered with the expensive license system and the overbearing methods rumoured to be used by Dana and some officials including troopers firing upon diggers. This incident was reported in The Argus in October 1851: “The redoubtable Captain Dana diversified his exploits on Saturday by knocking down a young man named Thomas with the butt of his whip; the young man fell into a pit from the effect of the blow. It is gratifying to record such a gallant military exploit – a repetition of the like of which will render it a matter of necessity to place him under the surveillance of his own satanic battalion of Black Guards – a suitable troop for such a commander.”

By early 1852 Captain Dana was finding it difficult to prevent the Aboriginal troopers from “absconding”, and had trouble attracting new members. “I can only account for [this] from the facility they now have of making money, by working for the Settlers, and also from their frequenting the Gold Workings.” 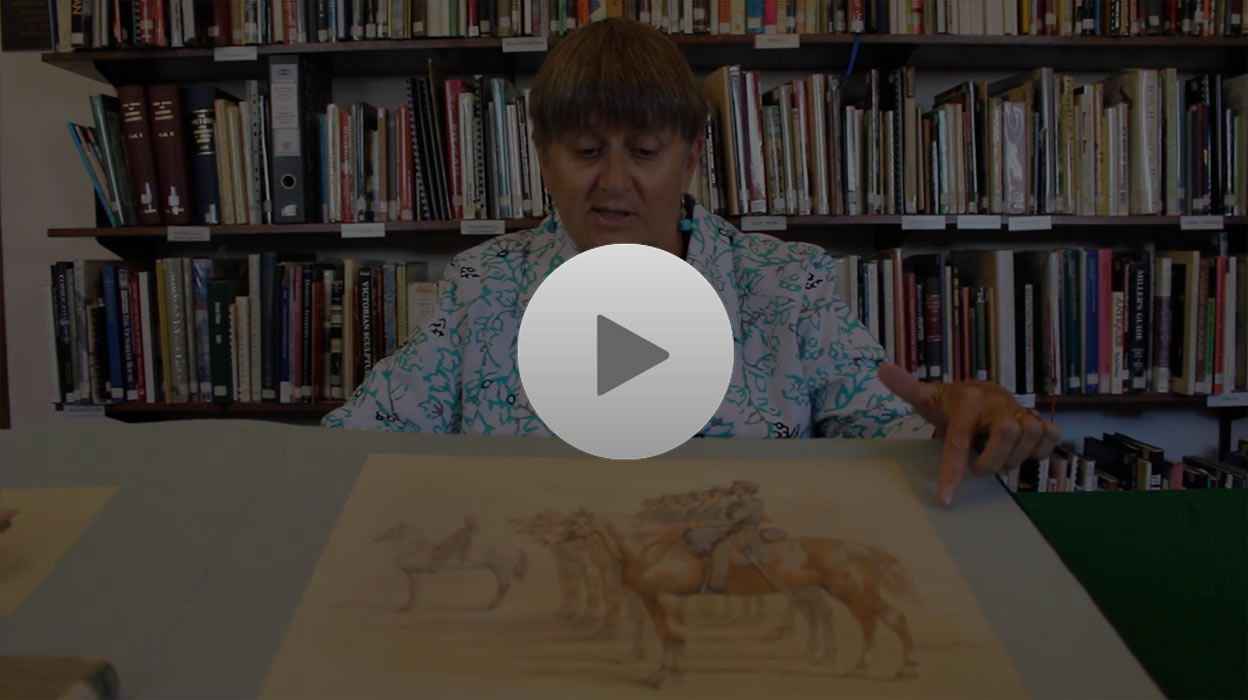 PLAY THE AUDIO: Miner and artist William Strutt circa 1851. 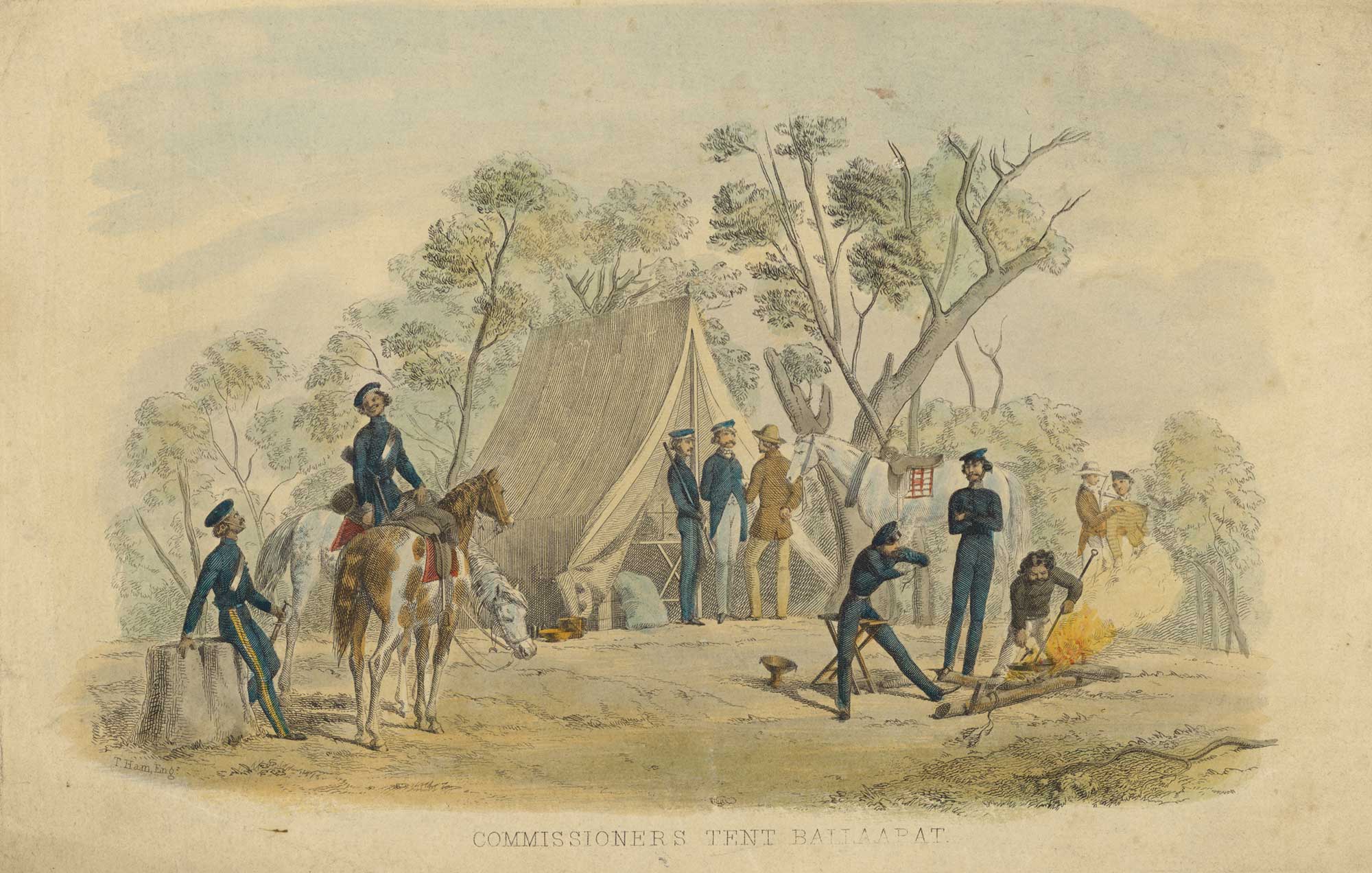 The many images that exist of the Native Police may demonstrate just how fascinating these “exotic” people were to goldfield visitors.
T. Ham, Commissioners Tent Ballaarat, 1854. Reproduced with permission of the National Library of Australia. 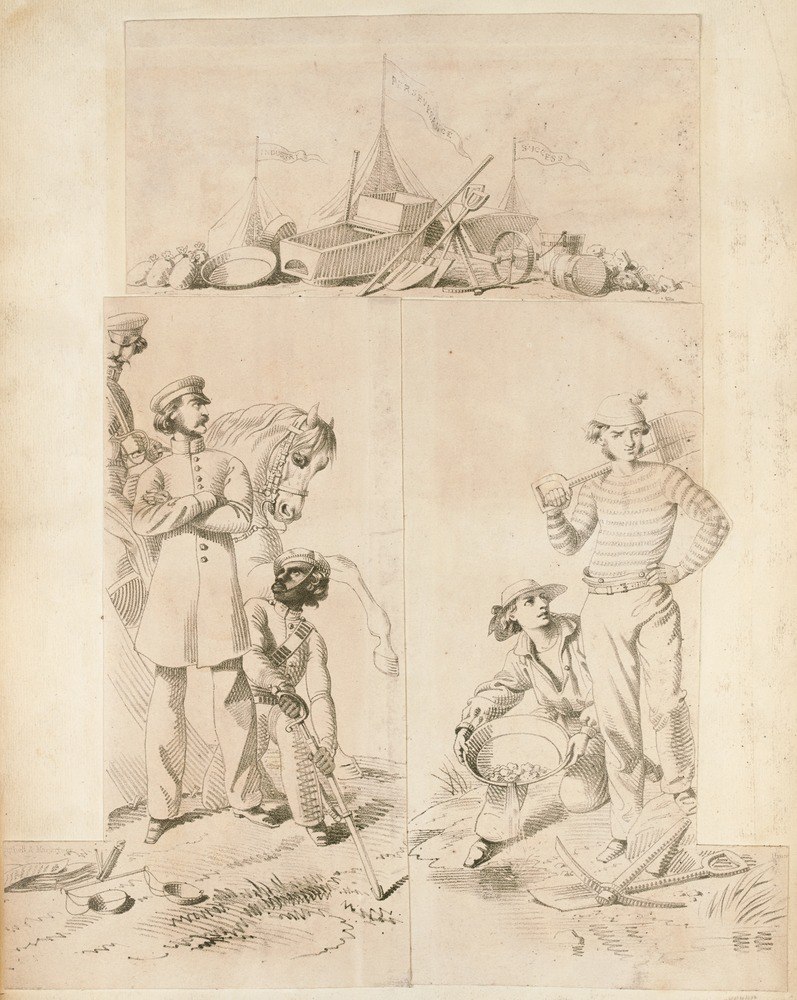 What is this Native Policeman doing exactly?
W. Strutt, Detail from the View of Golden Point, c.1885. Reproduced with permission of the State Library of Victoria. 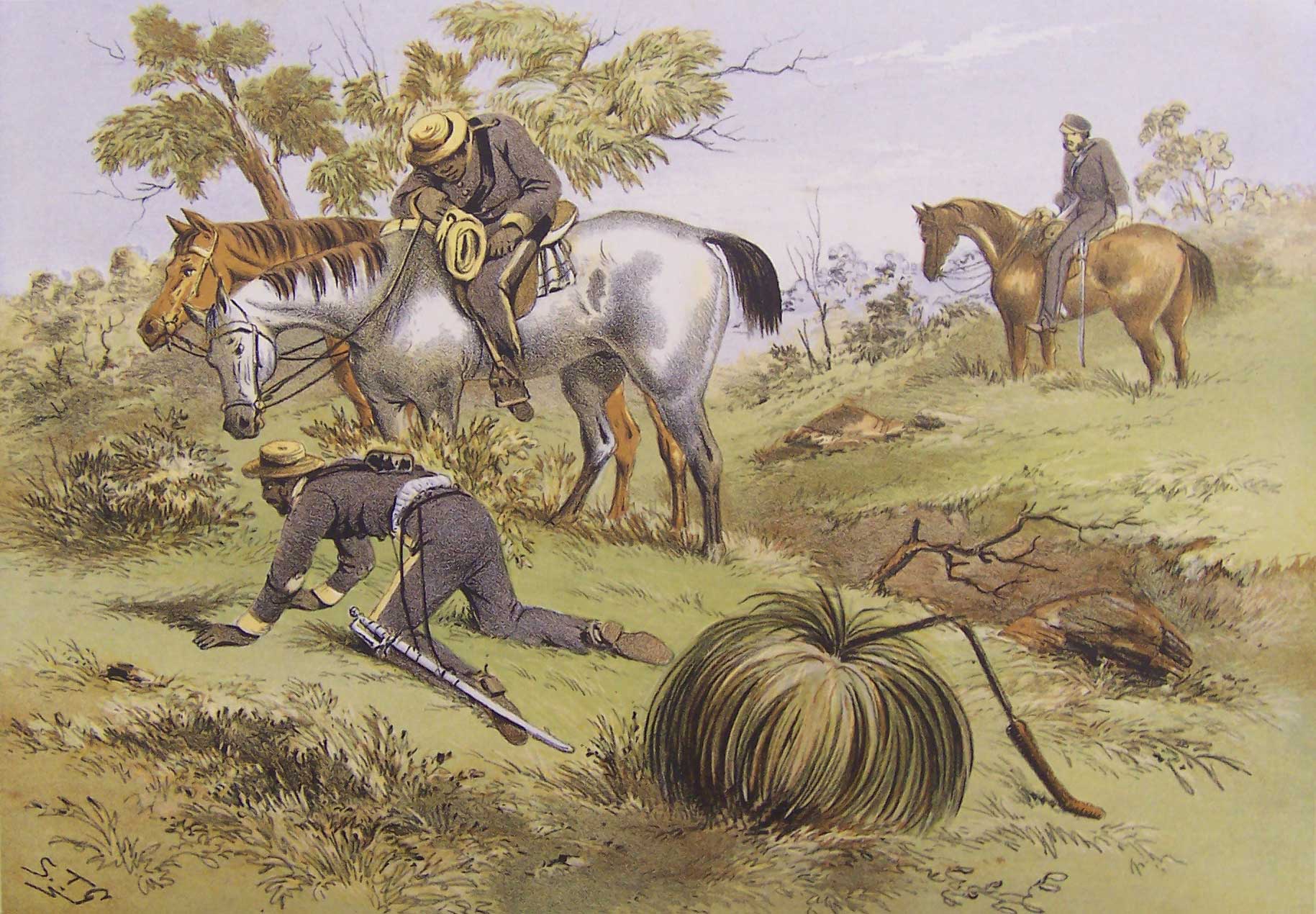 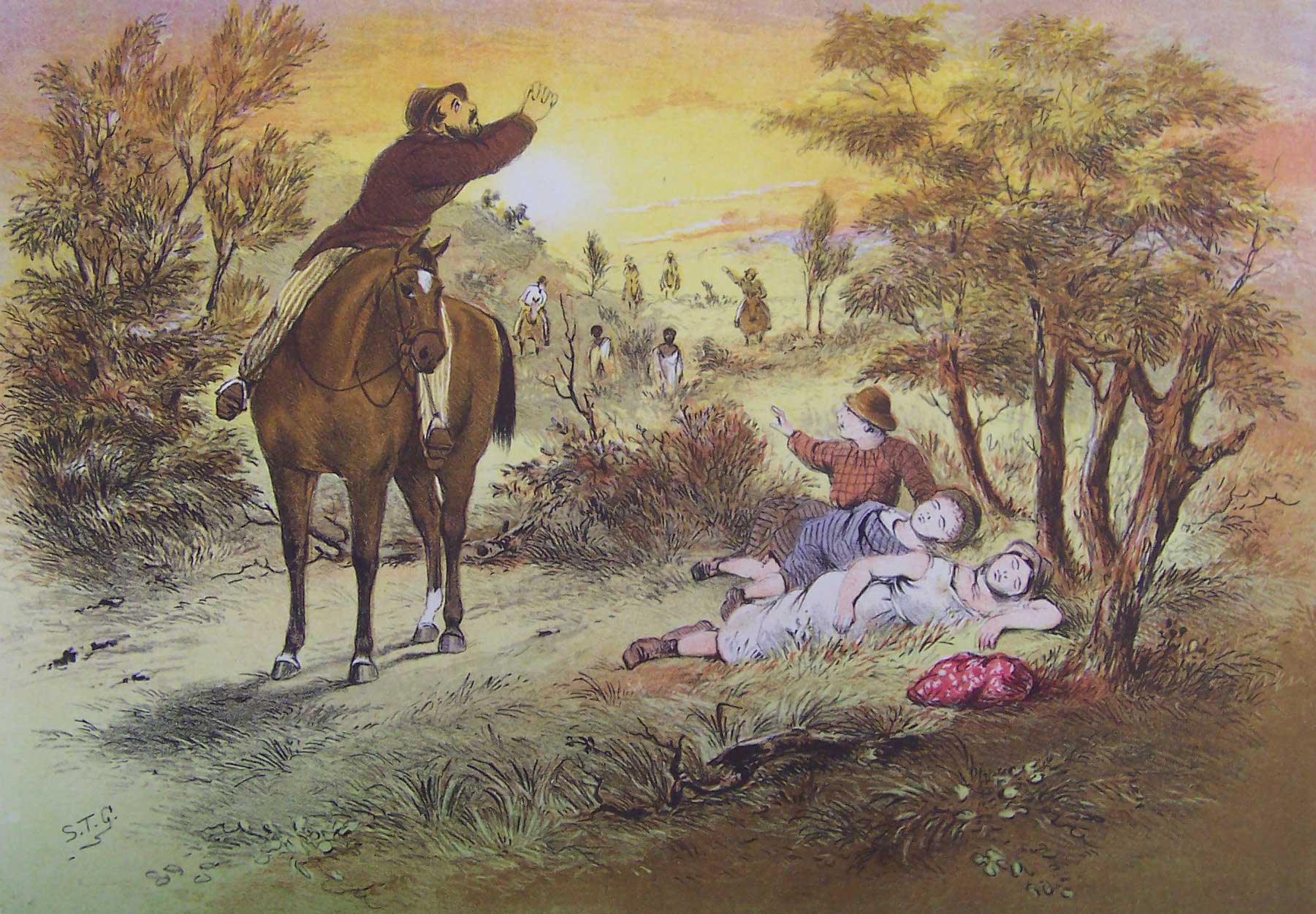 A great blog from SBS about Native Police