The supply of local foods by Wadawurrung People was important to early settlers.

When Europeans arrived in Australia they found a healthy, well-nourished Aboriginal population. Local foods were varied, abundant and nutritious, and here in Ballarat their supply was important to the health of squatters and later the gold miners who without them relied mainly on mutton and damper to survive. Eels, fish, kangaroos, emu eggs, possums, numerous kinds of birds, wombats and many other native foods were sold or traded on the goldfields by Wadawurrung People.

Europeans struggled to see all of the nutritious plants and animals the landscape provided, and what they could see they often had trouble getting their hands on i.e. fast kangaroos and emus. The Wadawurrung People took pleasure and pride in sharing their bush knowledge and skills with the early settlers. Little did they realise these camping miners would develop a permanent settlement here that would destroy the habitat of most of the local foods. Foods the Wadawurrung People had sustainably lived on for tens of thousands of years.

“I must describe our New Year’s dinner, to show what good things we had in the bush. We had kangaroo soup, roasted turkey well stuffed, a boiled leg of mutton, a parrot-pie, potatoes, and green peas; next, a plum-pudding and strawberry-tart, with plenty of cream.”

Katherine Kirkland, an early settler who lived just outside Ballarat in the 1830s-1840s.

In 1853, visitors to the Ballarat goldfields Samuel Mossman and Thomas Bannister wrote: “The fact is, the chef de cuisine at the Mansion House might add a recipe or two worth knowing to his cookery book from these natural gourmands.”

During the early years of the Ballarat gold rush, J. M. Smith, a miner, said: “I skinned and gutted him [a possum], toasted him that evening on the ashes and found him very fair feeding but rather gummy. Hunger was a good sauce and he went down slick. The aborigines do not skin them, but get some stiff clay which they carefully roll over the entire possum, then make a hole in the hot ashes and cover him up. When the clay becomes hard they break it; the skin and fur adheres to the clay and the animal comes out as clean, white and tender as a chicken, and with the above mentioned sauce, makes a good meal.”

Katherine Kirkland, an early settler who lived just outside Ballarat in the 1830s-1840s wrote: “Maranong is a root found in the ground; it is white, and shaped like a carrot, but the taste is more like a turnip. The leubras [Wadawurrung women] dig for it with long pointed sticks, which they always carry in their hands. I have often eaten maranong; it is very good; and I have put it in soup for want of better vegetables, before we had a garden.”

The ability of Victorian Aboriginals to exploit the European need for food was aided by the ineptitude of many European miners in their quest for bush foods. William Howitt also acknowledged that most European miners and settlers lacked the necessary skills possessed by Aboriginal People to bring down the game they sought.

“The plains abound with wild turkeys; but they truly were wild, for a gathering of various tribes had lately been there, and they had been hunting them; and though Alfred and Lignum pursued them with unwearied artifice and diligence, they could not succeed in killing a single one. Emus are sometimes seen in considerable numbers; but they had fled before the natives. The ducks flew in flocks of thousands; but as there was no cover on the banks of the lake, they would not allow you to come within shot of them, and we were obliged to content ourselves with a teal and diver or two.”

“The country for many miles around on all sides was one vast forest, with many open glades … one bird [the Bustard] now very scarce in Europe are of gigantic size and of most delicate flesh may be found in large flocks [and are] frequently shot by the natives … miniature kangaroos abound in the ferns but are fast disappearing in the face of civilisation … a native cat with pointed nose resembling a ferret, opossums, eels…” From an unnamed visitor to the early Ballarat goldfields.

“I must describe our New Year’s dinner, to show what good things we had in the bush. We had kangaroo soup, roasted turkey well stuffed, a boiled leg of mutton, a parrot-pie, potatoes, and green peas; next, a plum-pudding and strawberry-tart, with plenty of cream.” Katherine Kirkland, an early settler who lived just outside Ballarat in the 1830s-1840s.

“The tribe still continue to make possum rugs, and if steady, might make a good living by it, as they generally get 20 shillings to 30 shillings for each rug, which they can make in 14 days. The women also employ themselves in making baskets and nets, which they sell to the European. They sometimes offer fish for sale, with the proceeds of which they supply themselves with rations, and sometimes with clothes, such as hats, handkerchiefs and some of them with boots… they have been travelling amongst the stations, only a few calling for rations… they still fish when fish can be got, and hunt the opossum, and make rugs of the skins.” Andrew Porteous, Honorary Correspondent for the Aborigines in the Ballarat District, 1866.

“In some of the fresh-water ponds there are found immense quantities of mussels, which the native women dive for. We often saw numbers of shells lying in heaps where the blacks had been eating them. They are also fond of a large grub found generally in the cherry and honeysuckle tree; they can tell, by knocking the tree with a stick, if any grubs are in it. When they knock the tree, they put their ear close to listen, and they open it with a tomahawk at the very spot the grubs are to be found. It is a large white grub with a black head. I know a gentleman who was tempted to taste them from seeing the natives enjoy them so much, and he said they were very good, and often ate them again. Manna falls very abundantly from the gum trees at certain seasons of the year; I think it was in March I gathered some. It is very good, and tastes like almond biscuits; it is only to be procured early in the morning, as it disappears soon after sunrise.” Katherine Kirkland, an early settler who lived just outside Ballarat in the 1830s-1840s. PLAY THE AUDIO: Katherine Kirkland, an early settler who lived near Ballarat in the 1830s-1840s. Many settlers were interested in tasting and learning to hunt/gather local foods, sometimes out of necessity, but also out of curiosity. More research is needed to learn how many local plants and animals became extinct as a result of this new demand.
S. T. Gill, Night Fishing, 1865. Reproduced with permission of the Gold Museum, Ballarat. 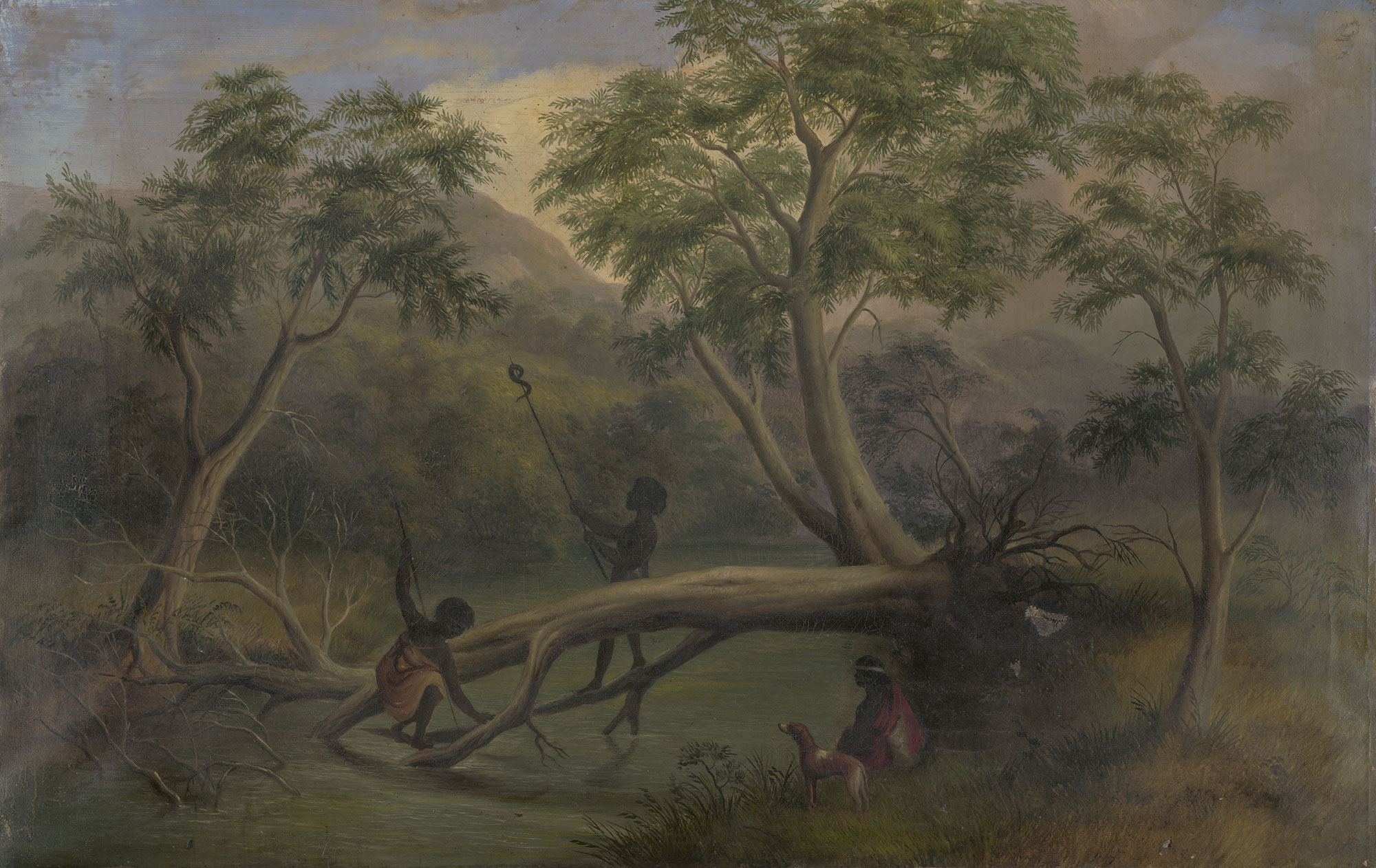 Eels were a staple protein in many parts of the country, but particularly here in South Western Victoria. They were often smoked or dried or both, and traded across huge distances. Large eels from lakes and streams in the Ballarat region were sold on the goldfields.
S. Knights, Natives spearing eels, on Back Creek, 1852. Reproduced with permission of the National Library of Australia.

A short video on Wadawurrung foods and pre-contact trade